Tips from the Bar: Not Just for Under the Bed Any More 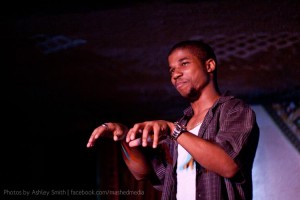 Deonte Osayande is a touring poet out of Detroit, Mich. He was a member of the 2011 Detroit National Poetry Slam Team, as well as the SlamMaster of the 2012 Detroit Rustbelt Regional Poetry Slam Team where he individually placed 5th in the Midwest. He is a two time Dudley Randall Poetry Contest winner, as well as one of the winners of Wayne Literary Review’s 2011 Poetry Contest and for the Define Your Legend Poetry Contest at the Charles H. Wright Museum of African American History. He is co-winner of the Howling Wolf Chapbook Contest at the University of Detroit Mercy and will have a co-written chapbook published in the fall. He was a former presidential ambassador for that same university with publications including issues 16 through 19 of the literary journal [sic], and online publications with Curbside Splendor, Requiem Magazine, Quantum Poetry Magazine and Emerge Literary Journal.

Want to check out some of Deonte’s work online? Check out “Drains” at Quantum Poetry Magazine.