Tips from the Bar: Beyond Persona 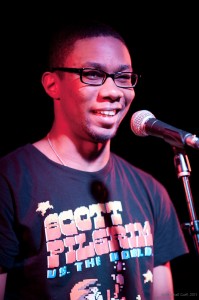 Omar Holmon at a press conference after saving fifteen baby pandas and a bottlenose dolphin from a burning building.

Omar Holmon is a Rutgers graduate, a four-time New-York-region Grand Slam Champion (2008, 2009 at Jersey’s Loserslam, 2009 at the Nuyorican Poets’ Cafe, and 2010 at Urbana GrandSlam) and the only man alive to punch the planet Jupiter in the face. A self-professed nerd poet, Omar moves effortlessly through the comic and the tragic with a disarmingly sweet stage presence and a whole lotta smarts to boot.

Omar is featured on season two of Verses & Flow (tv one) and as of five minutes ago discovered three species of ferns all of which that he did not just make up to fill space in this bio. He also really likes otters and pandas.