The Cantab Lounge was stuffed to the gills last night for the final rounds of our two-night World Qualifier series, with strangers practically in each other’s laps just to catch a glimpse of the finalists. The eight poets were gunning for that all-expenses trip to the 2012 Individual World Poetry Slam in Fayetteville, Arkansas (don’t you laugh! Arkansas loves poetry!), and it would all come down to a wicked head-to-head match-up in the fourth and final round. 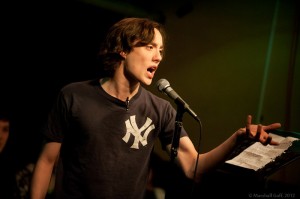 Due to a last-minute drop-out, Bobby Crawford was called up from the minors to slam in last night's World Qualifier Final. Here he performs in the January semi-finals. Photo by Marshall Goff.

The slam kicked off with Jared Singer, special guest from NYC, as the first sacrificial poet, and Sophia Holtz bounced back from her elimination from semi-finals last week to bring an intimidating piece to the second sac spot. Finalist Nate Leland found himself unable to attend at the last minute, so last week’s ninth-ranked poet, Bobby Crawford, cheerfully jumped in the mix to open up the first round. After a round of painfully consistent judging (sixes and sevens! fours and fives!) Bobby and Matthew Richards were eliminated, with Melissa Newman-Evans decisively taking the top score from the final spot in the round.

Round two opened up with Kevin Spak leading the audience in a (non-printable) call-and-response that stood as the second-highest score of the round; Melissa just edged him out a few poems later. Meaghan Ford was narrowly eliminated in this round, and Sam Teitel took a surprise drubbing from judges who had enjoyed his mockery of New York City in round one, but were apparently unfamiliar with Jew-berty.

The fourth “long-poem” round saw Mckendy Fils-Aimé step off-mic to work the room; a flawless performance of his Michael Jordan piece earned him the highest score of the entire night. Paulie Lipman’s memorial to Blair was the only poem to take advantage of the four-minute time limit, but a super-consistent judging staff returned to their unimpressed baseline. Spak put up a solid effort with a newer-to-this-listener piece dedicated to a past co-worker, but, in an ironic twist, was soundly defeated by Melissa’s love poem.

That left Mckendy and Melissa to fight it out in the final round! Both poets had put forth solid efforts all night; Melissa had won the first and second rounds and was sitting on the coveted final performance spot in the pairing, but Mckendy had clearly been gathering momentum. When the dust cleared, Mckendy’s “Elegy for the Aftermath” topped out over Melissa’s “Letter for Myself at Seven Years Old,” and the crowd went wild. 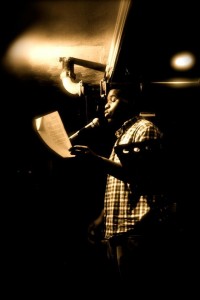 Congratulations to Mckendy Fils-Aimé, who will represent the Boston Poetry Slam @ the Cantab Lounge in Arkansas this October! Special thanks to all the poets who slammed, audience who cheered and heckled, and, of course, a crew of the most fabulously consistent and harsh judges we’ve seen in a long time: Lindsay Warriner, Dave McKenna, Jeep and Josh, T♥, and Ikenna and Khadijah.

Next week: we knew we’d have to bring in a champion of everything to top this week’s show, so we booked Sierra DeMulder, National Poetry Slam champion from 2010 and 2011. We’ll also hold an open poetry slam in the 8×8 series.