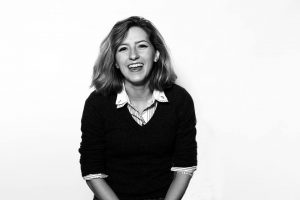 Chloé Cunha is a poet, comedian, and occasional sapphic vampire, such as in the retro indie horror film, Blood of the Tribades (2016). Although she was born and raised in Cambridge, Chloé actually discovered her love of poetry while living in New York, with Bar 13’s now discontinued louderARTS reading series, and only first stumbled into the Cantab when she moved back in the fall of 2012. She has been happily stumbling around that dingy basement ever since. 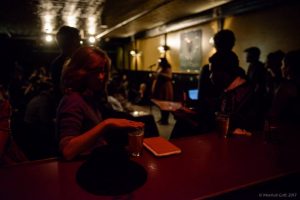 Chloé Cunha listens in from the bar at the Cantab. Photo by Marshall Goff.

Chloé was co-host of The Encyclopedia Show: Somerville, and has featured at Boston Poetry Slam’s queer sister reading, Moonlighting, as well as Slam Free or Die in Manchester, N.H., and the Cambridge Arts Council’s queer showcase Rainbow Room, curated by Jade Sylvan. Her work has appeared in online journals at Scout Cambridge, Amethyst Arsenic, and Electric Cereal. Additionally, she won Poetry Business Manager‘s 2015 Scalia Dissents Formal Poetry Contest for writing a truly disgusting ghazal about Justice Antonin Scalia, and was a runner-up for Cambridge’s 2016 Sidewalk Poetry Contest, for which she performed at the city’s annual Riverfest. Michael F. Gill once described her haikus as “dense and meaty,” which means if they were chicken pot pies, they would be totally awesome and filling.

Chloé also performs comedy throughout the city and is co-host of the upcoming podcast Yes Homo!, centered on LGBT+ comedians. You can catch her being silly on Twitter @ChloeCunha or shoot her an e-mail at cunha.chloe@gmail.com.