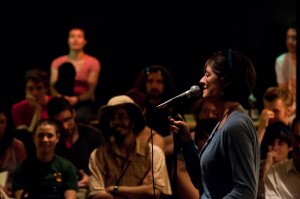 April Ranger grew up in rural Maine and discovered the Cantab Lounge while pursuing a theater degree at Emerson College. An open mic standout for months, she made a decisive slam debut in 2008, qualifying to try out for the venue’s National Poetry Slam team in one of the last open slams of the season. After handily making the team’s roster, that same year saw her competing on the Finals Stage of the National Poetry Slam in Madison, Wisconsin, and subsequently returning home to add the 2008 NorthBEAST Regional Individual Championship to her list of slam credits. 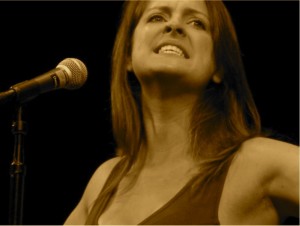 One of the Cantab’s franchise players, April went on to represent the venue as part of the NPS teams in 2010 and 2011, and additionally as the venue’s sole representative to the Individual World Poetry Slam in both 2009 and 2011. She has informally served as the Cantab team’s vocal coach since 2008, and is a valued workshopper and featured performer throughout the region. She has completed multiple short-leg national tours with past Cantab teammate Carrie Rudzinski.

An emerging playwright, April received Emerson’s 2007 Nicole Dusfresne award for her play Street Sweepers, and her ten-minute play Frabjous Day premiered at the 2008 Boston Theatre Marathon at the Boston Center for the Arts. Her poems have appeared in Muzzle Magazine and Off the Coast, and she is the author of three chapbooks, We Are Not As Strong, The Sacred Heartbeat of Consent, and Blood Oranges, Top Bunk, and a CD, Like Canvas. With her twin sister, Aimee Rose, she is a co-founder of SOOP (Stories of Our People), a storytelling-and-poetry community show run from their home in Roxbury.