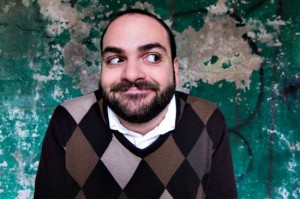 Jeremy Radin is a poet and actor and eater of fancy cheeseburgers. He was born and raised in California’s San Fernando Valley, where he began performing in musicals at thirteen because he had a lot of energy and Ritalin wasn’t working. Since then, you may have seen him on It’s Always Sunny in Philadelphia, CSI, and many others. As a performance poet, he’s shared the stage with such dynamic talents as Derrick Brown and Mindy Nettifee (as co-host of The Lightbulb Mouth Radio Hour), Anis Mojgani, Beau Sia, Mike Mcgee, Jon Sands, and Amber Tamblyn.

It’s at the crossroads of these two art forms that he has crafted his unique style of performance. Raw, visceral, and experiential, blending honesty and surprising humor, his live readings charge crowds, change rooms, and help people discover a love of poetry they didn’t know was within them. His writing is starkly revealing, tackling personal issues such as loneliness, difficulties with food and body image, family, and being put on medication as a child, all handled with wondrous imagination, wit, and accessibility.