Radio Recap for Monday, May 14

Whoo! We found the stage lights at Radio! This fabulous red-and-brick bar took in a growing number of poetry fans in the rain, starting off with a cool generative prompt from Mckendy Fils-Aimé (a little John Murillo, anyone?). Our open mic was packed –maybe it’s the 5-minute time limit that makes it so popular– and then we listened up to Simone Beaubien kick out a totally weird set, complete with new poems composed in the midwest! Mckendy closed the night with his own set, a reflective series of portraits that had the workshoppers inspired enough to scurry for notepaper.

Next Monday: we’re back with a 2012 Boston Slam Team double-whammy! On Monday, May 21, Melissa Newman-Evans and Kemi Alabi will share feature time starting at 9:00. You’ll want to get there at 8:00 for the open mic, or, even better, come at 7:00 for Melissa’s writing workshop! Doors open at 6:30 for a 21+ show, and cover charge is just $5 for the whole night. 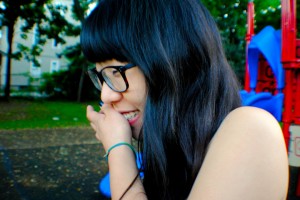 Franny Choi’s poetry explores the collisions of identities, the volatile nature of language, and the haunting relationship between an artist’s body and her body of work.

She is the co-author of two feature-length spoken word poetry shows, pretty/ugly and Maybe Never Words. In February 2011, her play Mask Dances was produced at Rites and Reason Theater as part of the Writing Is Live Festival, becoming the first undergraduate production in the history of the festival. Franny’s literary work has appeared in Fringe Magazine, Issues, The Java Monkey Speaks Anthology, and the College Hill Independent. Her work in Fringe was nominated for a Pushcart Prize and a Sundress Best of the Net Award in 2011. A graduate of Brown University’s Literary Arts program, she completed a cross-disciplinary honors thesis project, entitled “Per Mutation.”

Franny has served as an editor for VISIONS Asian American Literary Magazine and as a facilitator of WORD! Performance Poetry Group, which uses the medium to explore issues of race, class, gender, and sexuality.

Cantab Recap for Wednesday, May 9

In case you missed it: Patricia Smith, co-founder of the Boston Poetry Slam, featured at the Cantab this Wednesday! With no slam to hold her back, she gave the audience a marathon set of her new work… Expect inspiration from this show to blossom on our open mic for the whole summer.

Next week, we’ll have NPS 2012 Finalist Franny Choi from Providence! We’ll also continue our series of open slams in the summer 8×8.

Tips from the Bar: The Jamei Bauer Prompt

You Cannot Have The Kitchen Table, But I Don’t Give A Good Goddamn About The Stools: You have just broken up with someone, or more likely, they have broken up with you. It’s time to split up your belongings. There is something neither of you want. Explain why it’s they other person’s responsibility to take it.

Yes! Patricia Smith– that’s the co-founder of the Boston Poetry Slam, a four-time national individual slam champion, and a 2008 National Book Award finalist– is returning to the scene for a special feature opportunity. She’ll be riding high on the latest work for her new book, a collection of poems about growing up under the influence of Motown.

Frankly, we don’t dare say more here as we already know her show will sell out in a hot minute. If you’re wondering what the big deal is, you can visit her staff page on our website, her personal site, or check out this video of her Motown crown sonnet for a ten-minute taste of this woman’s craft, strength of voice, and downright superhuman presence.

Doors for the show open at 7:15. The open mic begins at 8:00 and the feature performs at approximately 10:00. There is no poetry slam scheduled for this evening. The show is 18+ (ID required) and the cover charge is $3.

Radio Recap for Monday, May 7

Thanks to everyone who came out to our first night at Radio, which was a sweet success! This newly reopened bar at 379 Somerville Ave. in Union Square has a lovely stage, comfy chairs and tables, and great whiskey drinks. It’s almost too nice for us —almost. A cozy group of hard-writing spectators got along just fine with the owner, who opened up on a Monday evening to bring you poetry with Adam Stone and Emily Carroll.

The night kicked off with a prompt-based workshop with Adam, who offered us a writing prompt that was much more expansive than his usual Tips from the Bar: a persona- and cocktail-inspired hour generated some fun new work from about ten dedicated participants. Our open mic followed up (with a generous five minutes per person), and then we enjoyed some of Emily’s thesis work in her first feature! Adam brought the night to a close with a snarky set of new and old work.

We’ll be running workshops and features all month at Radio, and we’re back next week on May 14 with two of the best names (no, really: check out those vowels) in the business… Mckendy Fils-Aimé will lead a 7:00 workshop, then co-feature at 9:00 with Simone Beaubien! Doors open at 6:30 for a $5, 21+ show.

The feisty and fabulous Emily Rose dropped by this past Wednesday to bring us a very sexy workshop followed by a feature in kind! She even stayed late for extra credit heckling our slam: this latest 8×8 was a flashback to March, with Nora Meiners and Nathan Comstock facing off in the finals. The first win of the season went to Nathan, who’ll be invited back to the Champion of Champions slam in July.

Next week: we’re back on Wednesday with our usual open mic and an extended feature from Patricia Smith. Can’t wait until Wednesday? Come hang at New and Improved at Radio this Monday, May 7 with features from Adam Stone and Emily Carroll.

Tips from the Bar: We Demand an Apology

Apologize for the crimes committed by the monkeys on Maya Phillips’ pajama pants. 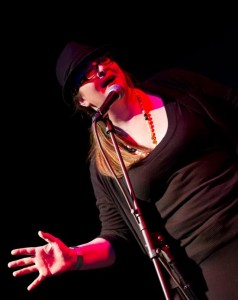 Emily Rose is a Chicago-born and raised poet, performer and host of many things. An active organizer in her community, she is currently a Real Talk Avenue Artist, co-SlamMaster and host of the Mental Graffiti Poetry Slam, Jilted Emily Rose at The Encyclopedia Show, Tournament Director for Louder Than a Bomb, member of the 2010 & 2011 Mental Graffiti Slam Teams, a board member for Chicago Slam Works, chair of poetry for the Bucktown Arts Festival, and much much more. Her first chapbook, Cigarette Love Songs and Nicotine Kisses (Cross+Roads Press), was published in 2004. Her work has appeared in After Hours, TimeOut Chicago and more. Emily Rose probably already likes you. 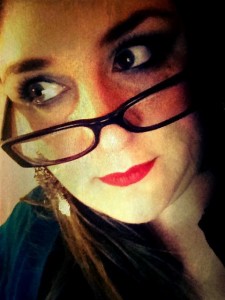 Special one-night only workshop! Emily Rose will offer an early-bird workshop at the Cantab Lounge before her feature. Drop-ins are welcome to swing by. Workshop description: