Tips from the Bar: Killing Your Darling 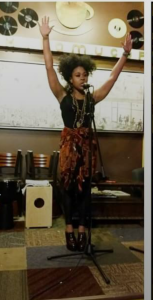 Siaara Freeman was born and raised in Cleveland, Ohio. She’s very proud of this even when others assume she’d feel otherwise. She began writing at 7 years old and actively slamming at 15 for the National Brave New Voices Competition until she was 19. She then entered the adult scene slamming for both Columbus and Cleveland. Siaara’s poems offer an actual face to the urban experience instead of a caricature, insisting that you see the people she sees, the stories she knows, whether you find them respectable or not. She has traveled the country and she does not make fans– she makes friends.

She met Maya Angelo and has a selfie for proof. She has been the grand slam champ in both cities she slammed for. (She’s never done an individual competition, but she’d like to.) Her team made it to final stage their first year at BNV in 2008, which was pretty lit. Enough about slam doe: “Siaara is attempting to grow her afro so tall, God mistakes it for a microphone and decides to speak into her.”