Tips from the Bar: The Lisa Slater Prompt

Wow, we have got some talented slammers at the Cantab, folks. Did you hear? Eight poets competed last night for the honor of representing the Boston Poetry Slam at this year’s Individual World Poetry Slam, scheduled for October in Phoenix, Arizona. At the end, only one poet was left standing: congratulations to Sean Patrick Mulroy, longtime Cantab regular and first-timer as an IWPS rep for the venue! 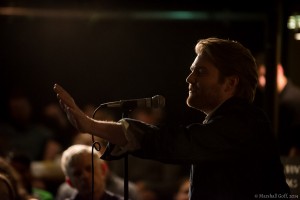 As you can see, it was a wild slam from the very start of the show! Our first eight-poet round kicked off with two sacrifices from Marshall Gillson and Nora Meiners– Nora, in particular, proved herself a crowd favorite, earning a score from the second sacrifice spot that would have easily carried her into the second round of the slam. There were lots of highlights in a highly competitive first round, including Truj’s “Open Letter to the Guy I Hooked Up with Last Night” kicking in the door with a strong performance, followed by Zeke’s harrowing, now-classic poem about how “even the silence shuts up.” The first-round winner by a long shot, though, was Mckendy with his newest work for slam, “Whistling Vivaldi,” which earned what would be the highest score until the final round! The two heartbreaking eliminations, of course, were Janae Johnson and Bobby Crawford– that’s the top scorer for this year’s Boston Poetry Slam Team and last year’s BPS IWPS rep, respectively– who, in a notable but statistically uninteresting coincidence, both performed pieces on the subject of standardized tests.

Round two opened up with Sean Patrick Mulroy in the unenviable position of following himself; having fared well with a serious piece to close the first round, Sean went all-out funny to earn a score high enough to tie for third in this round. Mckendy, Zeke, and Meaghan also advanced with Meaghan in the top spot after offering a Public Service Announcement About Your Genitals, and all four poets were only 0.2 apart at the end of the round. Left behind were Princess Chan, whose quiet family poem did not hit as hard with the judges as her first-round choice, and Truj with a new piece on page.

Although the judges were not advised of any changes for round three, all the advancing poets knew they’d have a full four minutes to perform in this long-form round. Zeke was the only one to take advantage of the extended time limit with a newer four-part poem, while Mckendy stayed under two minutes with a classic hard-hitting favorite. However, it was the two poets sticking to their already-polished three-minute work who advanced: Sean with a tightly wound form poem and Meaghan with the first love poem of the night.

That meant the final round came down to 2014 BPS teammates Meaghan and Sean! Given how close their finish was back at the team finals, this looked like it would be shaping up to a photo finish. Meaghan had saved some solid ammo for this final round and poured out a performance of Match Heads good enough to tie her own score from the previous round (third-highest in the slam so far). In a bold move, Sean chose to counter adolescent darkness with… Ke$ha! The judges rewarded him with the stop score of the night, officially making him our eleventh representative for the annual Individual World Poetry Slam.

Congratulations to Sean, and thanks to Marshall Goff for coming to shoot a few photos for us last night! Looking forward to sharing them with you all soon…

In the meantime, we’ve got some killer poetry shows going on in the next six days. First, the Boston Poetry Slam will be making a visit to the Attleboro for our annual Arts Museum Slam this Friday, May 30! The Museum offers ca$h prizes for both youth and adult slam winners, and it just so happens that Sean will be co-featuring there with Moonlighting co-host Emily Carroll.

Moonlighting, as you’ll recall, happens on the first Thursday of each month in Jamaica Plain, which means the next one will be seven days from this writing on June 5: the feature will be Charlie Bondhus, thoughtful and award-winning poet.

Those north of the city of Boston will of course know that we’ll be back at the Cantab next Wednesday, as always. Our June 4 feature will be Columbus treasure William Evans, followed by an open poetry slam. Hope to see you there!