Tips from the Bar: the Scott Woods Prompt 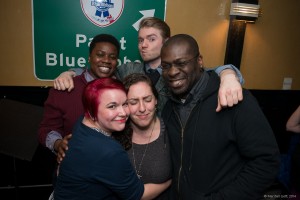 We’d have given you a spoiler alert, Cantab fans, but we know that with so many folks live-tweeting, Facebooking, and probably making high-stakes non-cash bets all over this slam, the fans at home probably knew the official count before some of the audience in the bar. Congratulations to the team, and thanks to Marshall Goff for some sweet photos of the fab five that will be repping us in Oakland, California at this August’s National Poetry Slam!

We’ll have a full play-by-play recap for you as the photos start to roll in, of course. In the meantime, here’s the final standings after three cumulative rounds:

Obviously, five team members means four heartbreaks, and it still smarts to have to let go of Mckendy, Bobby, Marshall, and Michael. These guys each brought remarkable, beautiful, and important work to the stage… And we also heard a rumor that they are all in the running for other NorthBeast slam teams in Manchester, Providence, and elsewhere (see our links to the right for details on those slams). We wish their competitors good luck, because they are sure going to need it in order to stand up to the powerful work these guys are slinging!

Lastly, we would be remiss if we did not thank our five HARDCORE judges, who lasted three tough rounds of wicked competitive work. Congrats to Kelsey and Dennis on their questionable anniversary, to Corey on his daughter’s intellectual and artistic development at Brown, to Ryan for being the only judge brave/foolish enough to volunteer, to Ally for arriving exactly on time for the toughest job of the season, and for Ginny who is absolutely, beyond the shadow of a doubt, qualified to judge a poetry slam.

Now: wave goodbye to March’s lion tail, folks, and get ready to greet the cruel, cruel (figurative) wasteland that is National Poetry Month! That’s right, April has arrived, and with it the riot of blossoms that is Khary Jackson‘s poetry. He’ll be in town as next week’s feature on April 2, followed by a 3-2-1 speed slam that’s open to the first eight to sign up. Hooray!