Tips from the Bar: Apocalypse Payday 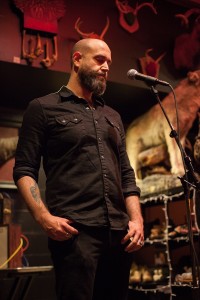 Janaka Stucky is the author of The Truth Is We Are Perfect and the publisher of Black Ocean, as well as the annual poetry journal Handsome. He is also the author of two chapbooks: Your Name Is The Only Freedom and The World Will Deny It For You. His poems have appeared in such journals as Denver Quarterly, Fence and North American Review, and his articles have been published by The Huffington Post and The Poetry Foundation. He is a two-time National Haiku Champion and in 2010 he was voted “Boston’s Best Poet” in the Boston Phoenix.

Per Janaka’s request, proceeds from his show will be donated to a local organization. Together we have decided to donate to the Boston group of Black Lives Matter, a cause close to the hearts and lives of poets in the nationwide slam community.