Tips from the Bar: The Aaron Rodgers Prompt

Due to circumstances beyond their control, Muggs Fogarty will be rescheduling their feature later in 2016. In the meantime, the Boston Poetry Slam is pleased to present an excellent last-minute fill-in of the utmost quality: 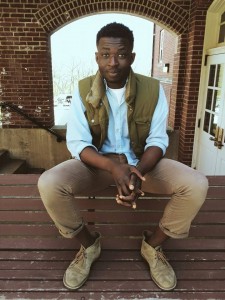 Emmanuel Oppong-Yeboah is a Boston-based poet and a recent graduate of the University of Connecticut. As an English and Urban and Community Studies major, Emmanuel spent his time at UCONN considering space— its vastness— and how the very concept of space as real and social construct can simultaneously restrict and enable movement. Emmanuel also spent his time at UCONN writing essays and poems. As you can see he is fan of long sort of incongruous sentences. In 2015 he was proud to serve as performance crew leader to UCONN’s spoken word organization, Poetic Release, and to compete at the 2015 College Unions Poetry Slam Invitational as a member of the UCONN slam team. He was also proud to co-found Exsistentia, a multimedia literary journal centered around addressing existential questions through art and artistic expression.

More recently, Emmanuel is proud to serve as the Director of Curriculum for Boston Pulse, a youth-empowerment organization focused on promoting positive change for young people and their communities through spoken word. Wow, there is a lot of pride going on here. This is a good thing; but while writing this personal biography, Emmanuel realized he was referring to himself in the third person. This upset him. He chose to write a list of some things that make him happy instead: hot carbs, brightly colored chapbooks, the long sigh at the end of a good book.

Biography of the POSTPONED feature: 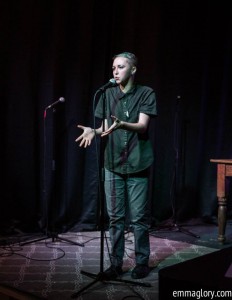 Muggs Fogarty is a genderqueer poet and teaching artist from Providence, Rhode Island. Since 2007, Muggs has represented Providence at seven inter/national spoken word competitions, and is the only person in Providence’s history to be a Grand Slam Champion in both the youth (2009) and adult (2015) finals. After graduating from The New School in 2013, Muggs has been mentoring with New Urban Arts, ¡CityArts!, ProvSlam Youth and is now serving as co-director at Providence Poetry Slam. Their published work can be found in FreezeRay, Wicked Banshee, and Bluestockings Magazine, among others. You can now send @muggsfogarty crystal ball emojis on Twitter.