Moonlighting: A Queer Open Mic and Reading Series on May 7, 2015 — Benefit for the Boston Dyke March! 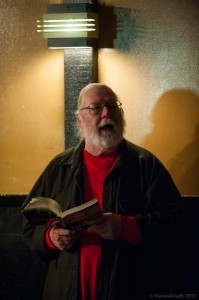 Michael R. Brown has published poetry, fiction, travel articles and columns in wide-ranging periodicals all over the world: his fourth book of poetry, The Confidence Man, was published in 2006 by Ragged Sky. Brown holds a Ph.D. in English and Education from the University of Michigan, and for 46 years he taught at high schools and universities from the South Side of Chicago to South Korea.

Since 1989, Brown has been active in poetry slams, performing in Europe as well as North America. For thirteen years, he hosted the Boston Poetry Slam at the Cantab Lounge and he appears in the film SlamNation. He is co-producer of The Culture of Peace, an international exhibit of art and poetry organized under the UN mandate for a decade of the Culture of Peace. He was general secretary of the Poetry Olympics, first held in Stockholm in 1998. He produced and directed Dr. Brown’s Traveling Poetry Show, a theatrical poetry ensemble.

After moving to Down East Maine in 2007, Brown and his partner Valerie Lawson have begun a monthly reading series and taken over the poetry journal Off the Coast. For a while, he covered the Passamaquoddy reservation and county health issues for the local newspaper. Now he is working on several books while he directs and performs with Stage East, the community theater at the Eastport Arts Center.

Note that tonight’s last chance poetry slam is a speed slam with 3-, 2-, and 1-minute rounds. Slam winners qualify for the 2015 World Qualifier.