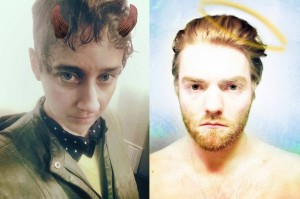 VIRTUE has been recruited by Sean and will be glowingly represented by Porsha Olayiwola, Marshall Gillson, Mckendy Fils-Aimé, Sophia Holtz, Andrew Campana, Janae Johnson, and Chloé Cunha. The team of SIN is led by Jade and will include Princess Chan, Steve Subrizi, Krystin Hill, Nora Meiners, Delisile Godeffroy-Taylor, and Dawn Gabriel.

This is as real as Valentine’s Day gets, listeners, so pack up your date and your moral compass and prepare for a bawdy literary evening.

This show in our weekly Wednesday series takes place at the Cantab Lounge, 738 Massachusetts Ave. in Cambridge. Doors for the show open at 7:15. The erotic-themed open mic begins at 8:00 and the slam will commence after the 10:00 break. The show is 18+ (ID required) and the cover charge is $3.