What an excellent open mic at the Cantab last night, folks: poets turned out in droves to hear (and be heard by) Canadian-gone-local poet Andrew Campana, and catching up with Austin poet Jena Kirkpatrick in a super-Southern-sweet spotlight feature. Official photographer Rich Beaubien was also in the house to get a few shots for us: 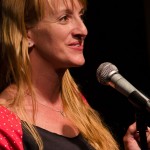 Jena Kirkpatrick spotlights on the open mic on October 15, 2014. Photo by Rich Beaubien. 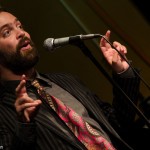 Andrew Campana takes the stage as the featured poet on October 15, 2014. Photo by Rich Beaubien.

A packed house hung on every word, especially Andrew’s carefully constructed, playful, and densely researched work. Missed the fun? You can at least check out one of the pieces Andrew talked about last night, Automation, published over on the Printer’s Devil Review.

The slam was a good mix of usual suspects, occasional some-timers, and imports from the Portland scene: the final round came down to Ed Wilkinson (again! Ed!) and an IWPS-fresh Sean Patrick Mulroy. Sean took the victory and the ten bucks, as well as the chance to challenge Champion of Champions Bobby Crawford at the slam on October 29.

Next week: newly-minted N.U.T.S. champion Meaghan Ford takes the stage for a full feature, and we enjoy the last open slam in this 8×8 series. See you there!