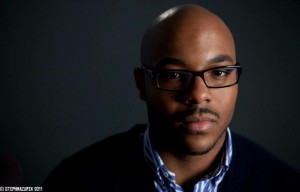 Originally from the south side of Chicago, Nate’s work has been featured in many prominent literary journals, on HBO, BET, OWN, and in the award-winning full-length documentary, Louder Than a Bomb. He is a former poetry slam champion and a graduate of University of Michigan’s Helen Zell Writers Program. Nate is also the founder of the Lost Count Scholarship Fund that promotes youth violence prevention in Chicago.

Tonight also marks the final night in our current 8×8 poetry slam series! Eight slam winners will slam off for the season championship and the opportunity to challenge reigning Champion of Champions Bobby Crawford.