Tips from the Bar: Buck the Trend 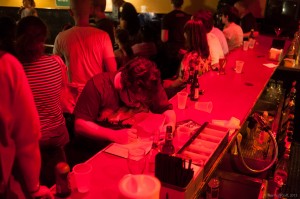 Kevin Spak works furiously to polish some last lines for the stage. Photo by Marshall Goff.

Kevin Spak has been sharing his kinda-funny, often poignant narratives at the Cantab for almost a decade now, and has been a proud lovely co-host since 2010. He also co-hosts the Encyclopedia Show Somerville, co-coaches the Emerson College Slam Team, and co-hosts and executive produces SlamCenter, slam’s premiere/only sports-style recap podcast.

Tonight, Kevin will be presenting an all-new feature-length murder mystery, with every poem giving the audience a look into the mind of a different suspect.