This past Wednesday, our marathon three-night, seven-round slam team selection process continued with the Team Selection Semi-Finals. The twelve poets who survived the Preliminaries were invited back for two more poems, hosted by ringmaster/special guest Erin Jackson. When the dust cleared, the results were like so: 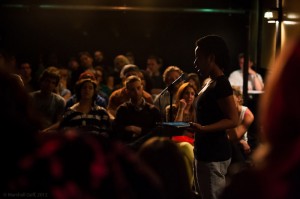 Maya Phillips shakes up the slam with The Things I Don't Say About Race. Photo by Marshall Goff.

Poets in bold have qualified to advance to the Finals next Wednesday, April 25. Christian Drake has regretfully decided to step down, so the ninth spot will be filled by Ed Wilkinson (Sam Teitel has elected to commit to the Manchester Slam Team for 2012).

Wednesday’s slam started off with a double-barreled bang, as Sam Teitel kicked in the door with an open letter to New York City in the voice of the city of Boston, followed by Meaghan Ford’s Medusa Weeds Her Rock Garden. The two persona poems in a row were a prelude to the theme of night, during which seven of the twelve performers would give voice to at least one fictionalized character. The next poet, Ed Wilkinson, started another trend with the snarky Toast: A Political Poem, being one of five poets to take to the stage that night with paper (or iPad) in hand. All the performers seemed effectively tied in the judges’ minds until Sophia Holtz, speaking in the voice of a hundred-year-old disaster, riveted the crowd with her quietly intense performance and pulled the scores up by nearly a full point to set the rest of the show off and running. 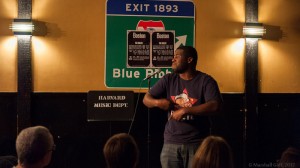 Countering the intensity in the room with one part erotica, one part humor, and one part persona (we hope) proved successful for Melissa Newman-Evans, who broke the 28 barrier from the fifth spot in the show. Mckendy Fils-Aimé aimed high by being the first poet to risk going off-mic, although his basketball poem was not as well-rewarded as it had been in the World Qualifiers back in January. A revamped performance of The Decent Ones by Omoizele Okoawo followed, scoring high enough for the middle of the pack.

Next up was Maya Phillips, who blew up the scores by saying the things she doesn’t say, seemingly unhindered by reading the poem quietly from behind the mic. Antonia Lassar followed with the wild emotional ride of anger, tenderness, humor, and intense focus she’s become known for, as did Christian Drake with a heartfelt and heartbreaking list poem, but both found themselves struggling against time penalties. Simone Beaubien slipped in between the two with a low-scoring work poem that would turn out to be one of the night’s few pieces of personal narrative. Closing out the round was Kemi Alabi, whose advice from the B Line (produced for last summer’s MBTA slam) topped out over Maya by 0.2 for the highest score of the night. 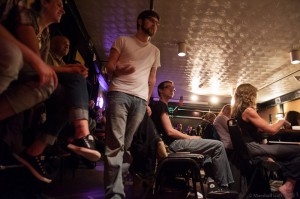 Facing an even earlier draw in the second round than in the first didn’t faze Meaghan, who brought a brand-new piece to the stage from the one-spot. She was followed by an on-page Kemi, who charmed the judges once more and secured her spot in the Finals early. Melissa switched gears to bring the weird with a witchy hex story, which was enough to lock her into Finals as well. The six-oh-threesome of Mckendy, Ed, and Sam followed, with Sam bravely working the whole room in a classic Cantab walk reminiscent of a certain sixty-something SlamMaster with a ponytail. Sam’s successful performance was unfortunately stymied by the biggest time penalty of the night, resulting in a(nother) round of boos for New York City.

Antonia came to the stage next, electing to set her feet behind the mic and praise the possibilities of anger. A big score locked her in as well and left the next five poets to sweat! Sophia and Christian both squeaked into Finals after time penalties (which may have been the third theme of the night), Sophia with an intense treatise on assault and Christian with a call to rejoice in the malleability of memories. Simone and Oz each followed with a little taste of sex; Simone brought paper to the stage on the subject of the delicious fig and Oz countered with the surprisingly short and sensual Her Mouth.

Capping out the slam was Maya, who came to the stage in the guise of George Wallace and put the slam away with the high score of the round, just enough to defeat Kemi by 0.1 for the top spot in the show. What a night!

We’ll be back next week for the Team Selection Finals, where the top nine poets will go three rounds to determine the five-person 2012 team! Phew, that was a lot of numbers… Let’s have some pictures instead. While you’re waiting for next week, please enjoy this gallery of photos from Marshall Goff: 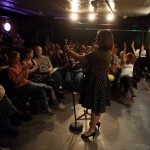 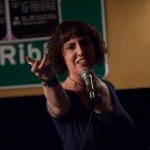 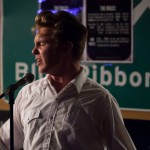 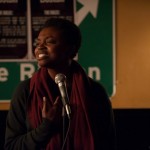 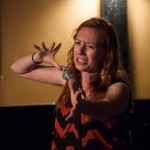 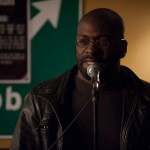 Omoizele Okoawo in a quiet moment. Photo by Marshall Goff. 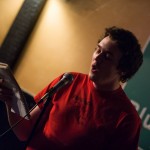 A translation of your employer’s unwritten rules, presented by Ed Wilkinson. Photo by Marshall Goff. 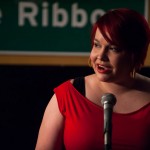 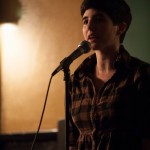 The Shirtwaist Fire as personified by Sophia Holtz. Photo by Marshall Goff. 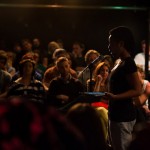 Maya Phillips shakes up the slam with The Things I Don’t Say About Race. Photo by Marshall Goff. 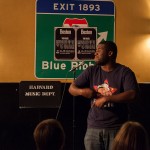 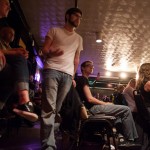