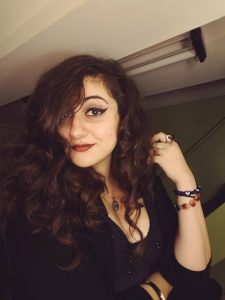 Jess Rizkallah is a Lebanese-American writer, illustrator, and coffee slinger living between Boston & New York. Alumna of Lesley University, MFA candidate at NYU & founding editor at Maps For Teeth magazine / pizza pi press, she’s a former Champion of Champion of the Cantab Lounge and a Pushcart Prize nominated poet whose work has appeared in Word Riot, Nailed Magazine, Button Poetry, HEArt Online, & on her mother’s fridge. Her first collection, the magic my body becomes, is forthcoming on University of Arkansas Press, 2017. Find her at jessrizkallah.com.