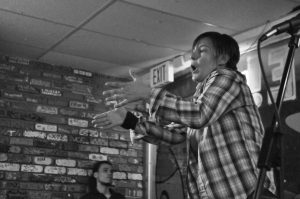 Cecily Schuler is a Miami-raised Brooklyn-based genderqueer writer and performer. Their work is featured in the Offing, great weather for MEDIA, Duende and elsewhere. While receiving an MFA in Writing and Social Activism at the Pratt Institute, and attending residencies at Breadloaf Writers’ Conference, the Home School: Miami and the Vermont Studio Center, they’ve been working on a full-length experimental poetic memoir of sorts. They are an assistant editor at Drunken Boat, and run Union Square Slam, a weekly poetry open mic and slam in the heart of New York City every Tuesday. Cecily’s chapbook, 296, is available from Next Left Press.