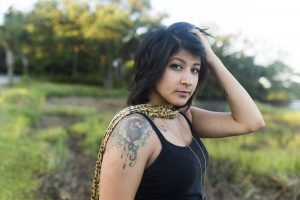 Raena Shirali’s collection, GILT, fiercely unveils its first generation, East Indian speakers’ reconciliation of her identity as it engages with and critiques both Indian and American culture’s treatment and expectations of women. David Winter’s chapbook Safe House, and his current manuscript Archived Light, explore how queer and raced bodies live and love in a violent world. By performing their poems in conversation with each other, these two poets pose questions such as: How do we discern safe space from violence in drag? How can fragmentation and lyric explore our unknowable selves, lovers, heritages? How do we reconcile the personal body with the political, the self with its surrounding cultures? How can violence be music, and music be violent? How does communication fail us; how then, can silence (of lovers, families, cultures, nations) be a source of trauma? And can such silences be reclaimed as spaces for meditation or healing? 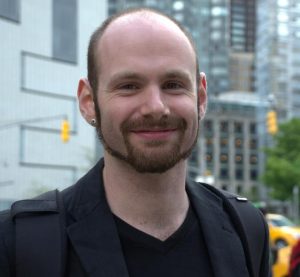 The first time David Winter performed his poetry was at the Cantab Lounge in 2004, where he was a regular until leaving for college the following year. More recently, he wrote the chapbook Safe House, which was selected for publication by Ocean Vuong and Helen Vitoria of Thrush Press. His poems appear in publications such as The Baffler, Day One, Four Way Review, Muzzle, Ninth Letter, The Offing, and Winter Tangerine. David received an MFA from The Ohio State University and a 2016 Individual Excellence Award from the Ohio Arts Council. He is currently working on a full-length manuscript, entitled Archived Light, as a 2016-18 Stadler Fellow at Bucknell University.

Indian American poet Raena Shirali’s first book, GILT, is forthcoming in 2017 with YesYes Books, and her poems have appeared or are forthcoming in Blackbird, Crazyhorse, Four Way Review, Indiana Review, Muzzle Magazine, Ninth Letter, and many more. She received her MFA from The Ohio State University. Her honors include a 2016 Pushcart Prize, the 2016 Cosmonauts Avenue Prize, recognition as a finalist for the 2016 Tupelo Quarterly Poetry Prize, the 2014 Gulf Coast Poetry Prize, recognition as a finalist for the 2014 Ruth Lilly Fellowship, and a “Discovery” / Boston Review Poetry Prize in 2013. She will be the Spring 2017 Philip Roth Resident at the Stadler Center for Poetry at Bucknell University, and currently serves as a poetry reader for Muzzle Magazine.