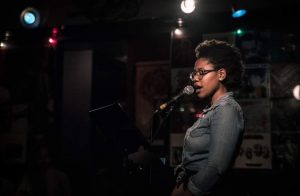 Sasha Banks is a poet whose work has appeared or is forthcoming in RHINO, Kinfolks Quarterly, Alight, Poor Claudia, Austin IPF, B O D Y Literature, The Collagist, and has been performed in Tulane University’s Vagina Monologues. Sasha is the creator of Poets for Ferguson and a MFA candidate at the Pratt Institute. She lives in Brooklyn, N.Y., where she is learning to be Black and spectacular at the same damn time.