Tips from the Bar: Your Move, Pidgie 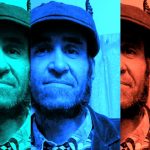 jeff taylor writes poems when he’s not running cables along a wall or telling his kids not to paint on each other. His poems have been found in various print and on-line publications, including Word Riot and The Boston Poetry Slam: Twenty Years at the Cantab Lounge. A resident of nearby Everett, jeff works in sound and is a dozen-plus-year veteran of the Cantab; he can often be found sneaking in just in time for the end of the open mic, feature, and slam.