The 2016 Boston Poetry Slam Team bouted at Nationals last night in the first of two preliminary bouts, taking a rank of 2 behind the Atlanta-based Art Amok team, and defeating two teams from Chicago (Uptown/Green Mill and Mental Graffiti). 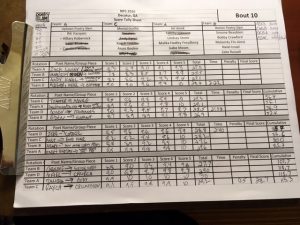 It was, of course, a hot night in Decatur, and perhaps eighty people were packed into a tiny, windowless room at the DeKalb Library under the watchful and experienced eye of host Adriana Ramírez, staring down the barrel of a powerhouse preliminary slam. Maya Hersh (lately of Seattle, but also a one-time NorthBEASTer) kicked off the night with a sacrifice dedicated to taking charge of the day, and the draw for the first round shook out to be Art Amok, Green Mill, Mental Graffiti, then Cantab. With four experienced teams and lots of cross-venue friends in the house, the room was hot in all possible ways.

Art Amok started out the first round with Zach Linley, who bait-and-switched the eager audience with an opener that seemed dedicated to a fun takedown of the Fantastic Four movies, then transitioned to a blistering recital of the names of black women made Invisible Women; scores ranged from 8.3 to 9.8, showing off what would be one of the highest-scoring bouts of the night. Green Mill placed a three-poet group piece in the B slot, a send-up of homophobia that hides behind monotheism, and Mental Graffiti followed with a solo effort from Andy Karol on gender labels and identity. Cantab closed the round with a group piece from Neiel Israel and Mckendy Fils-Aimé that blew the top off the room, netting the judges’ first 10 and giving a Boston more than a one-point lead at the end of the round.

Mental Graffiti fired back immediately in round two, opening with Tim (Toaster) Henderson’s famous “Advice” poem, which would end up garnering the highest score of the night and gaining a quick 0.9 back on Boston. Art Amok followed up with a sound-heavy three-poet group piece incorporating musicality for a similar score. A last-minute swap-out sent Bobby Crawford to the stage with an exceptionally emoted version of his prophylaxis poem, turning the room hard to the left and holding score. Green Mill stayed committed to solo work to close out, but couldn’t hang on as scores started to slide: second round finished with Cantab up a half-point on Mental Graffiti and Art Amok trailing by 0.4.

Boston was right back up again to open the third round, which was Zeke Russell with a story about a shotgun, presented in classic stand-and-deliver Cantab manner; Zeke owned the room and nearly all the solo performances of the night so far, garnering a standing ovation for a beautifully performed piece. A take-no-prisoners Billy Tuggle followed with Concrete Lion for Mental Graffiti and Hillary Kobernick had a few things to say about Miley Cyrus for Green Mill, cementing what appeared to be a very solid Cantab lead. Closing out the third round from the much-maligned A draw, however, were Gabe Moses and Lindsay Stone with a group piece explaining in no uncertain terms what trans people actually do in the bathroom: the home crowd and judges responded with a monster score, just four tenths short of perfect. With one round to go, Cantab and Art Amok were all tied up, with the closest Chicago team trailing by 1.1.

Green Mill finished out their run with Caroline Watson’s solo piece about growing up as a southern woman, capitalizing on the resonance of the room. Boston’s last play was Neiel Israel with a solo poem about The Church, good enough for the second-highest solo score of the night so far, and mathing out both Chicago teams… But it was Art Amok with the strong finish again, coming up with a perfect 30 for Talicha Johnson’s body image poem and knocking Boston back to the 2 spot. Looking less mathematically eliminated and more powerhouse brilliant, Raych Jackson finished the night for Mental Graffiti with good choices about what to say in church.

At the end of the night, the Cantab was proud to take a hard-fought 2 in a bout big enough to feel historic. In other NorthBEAST news, Providence also took a 2 last night and Mill City made a big third-round push to take a 3, with Verbal Slap taking a heartbreaker of a 3 (just 0.1 behind the 2-spot) and Lizard Lounge, down a poet at the last minute, holding onto a 4 after their first bout. We bout again on Thursday at 7pm, this time with Mill City, Providence, and Montevallo, and maaaaaaaaybe the SlamMaster will have the energy to recap that one for you, too.

Tonight, of course, don’t forget: jeff taylor will be on the Cantab stage for a full feature, and it’ll be the last open slam in the current 8×8… Which, if you’re thinking about it, is a qualifier for the 2017 Boston Poetry Slam Team. Go see!