Due to the vagaries of life, travel, and art, our re-scheduled feature, Raven McGill, will also not be able to attend this week. In great news, the following formidable and excellent local will (definitely, definitely) fill the spot: 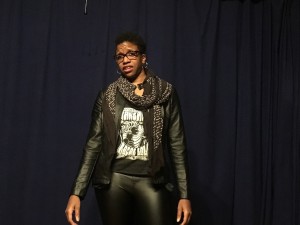 Rushelle Frazier is a queer black feminist writer, permaculture educator, urban farmer, herbalist, and organizer. She was a member of the 2002 and 2015 Worcester Slam Teams and co-coach of the 2004 Worcester Youth Slam Team and the 2010 Savannah Youth Slam Team. She has been the founder and coordinator a handful of well-loved readings, most recently the Hot Spot at Nine Dot Poetry Series. She was voted Best Female Poet at the 2006 Savannah Spoken Word Festival.

You can visit her at rushellefrazier.com, or check out recent video of her poem “Ah, Merica” on YouTube. Order her newest book, Heavy Honey, from DoubleBunny Press (or pick it up at the show)!

Note that tonight’s open poetry slam is a speed slam with 3-, 2-, and 1-minute rounds. Slam winners qualify for the 2016 World Qualifier.

Bio of the canceled feature: 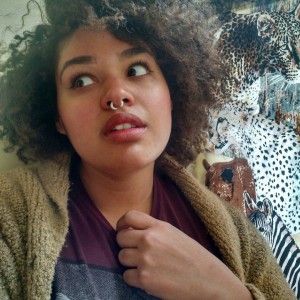 Raven McGill is a soft angel/visual artist and poet hailing from New Hampshire (currently living in Oakland, Calif.) who has somehow convinced thousands of people that she is a somewhat regularly socialized human. Raven is a visual artist and performance poet whose competition credits include the Northbeast Underground Team Slam (N.U.T.S) with The Losers Club team, the National Poetry Slam as part of the 2015 Slam Free or Die team, and the National Underground Poetry Invitational Competition, for which she was a semi-finalist in 2015.

Her poetry can be found via Radius Lit and Youtube via Slamfind and Button Poetry. Her poems have been on Everyday Feminism and Huffington Post Black Voices. Her visual works can be found on tumblr (for now). You can also find her pretty much everywhere on the internet because it’s spooky like that.

Due to circumstances of scheduling, Timothy DuWhite will not be able to feature this week; we are actively looking to re-book the poet for an August 2016 date.

Bio of the original canceled feature (we look forward to re-booking Tim for August): 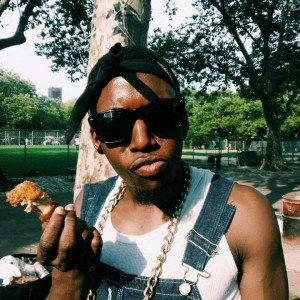 Through mistakes, short-comings, and failures Timothy DuWhite has been able to fashion himself a body of work that speaks directly to the value of transparency as well as self-accountability. Timothy has dedicated his journey of both artist-hood as well as person-hood to the preservation of stories, all of our stories, and all of the purpose they bear. As a spoken word artist, Timothy enlists his audience members in arratives spanning the pain of love, the insurmountable teeth of joy, the importance of forgiveness, the realities of living with a disease, the struggles of a man of color, the struggles of a queer man, the interconnections of the human experience, and every bit of beauty that can be found in the small and seemingly insignificant.

Timothy’s work has been featured at venues such as the United Nations/UNICEF, Apollo Theater, San Diego State University, Nuyorican Poet’s cafe, La Mama Theatre and many more. Timothy believes that by sharing our individual experiences and maintaining a dialogue of honesty amongst ourselves we can better navigate this behemoth we call life.