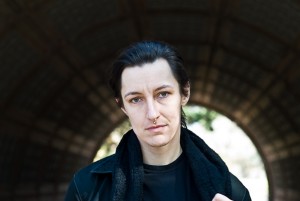 Corrina Bain is a gender non-conforming writer, performer, and teaching artist. He is a former member and coach of multiple national-level poetry slam teams. His work has appeared in anthologies and journals such as Muzzle Magazine, PANK, A Face to Meet the Faces, and the Everyman’s Library book Villanelles. His work engages the nuances of the body as a source of identity, pleasure, betrayal, and shame. While deeply rooted in the personal and specific, his vision extends to encompass history, mythology, and politics. No injustice, hypocrisy, or human weakness escapes this poet’s gaze, especially his own. Searching beyond violence, Corrina suggests that there is power in trusting the body’s wisdom, in witnessing suffering, and in speaking what you do not dare to say. Currently, he lives in Brooklyn where he practices roundhouse kicks, twerking, and emergency psychiatric counseling.