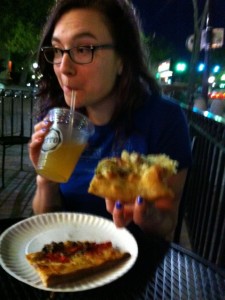 Ariel Baker-Gibbs’s childhood was split between Toronto, ON, and Hornby Island, B.C., and she grew up competing for space with the largest collection of children’s books anyone has ever seen. She has been a resident of Somerville, Mass., for the past four years, reading grody French post-structuralist philosophy and all the technology and new media theory for the MIT Press. She is off to rejoin her beloved intertidal creatures on the West Coast and to start a PhD in English at UC Berkeley where she plans to read, write, and sign various kinds of words about the role of fantasy in popular culture. You can google her and find many strange things.