Tips from the Bar: “Sure, Try Irony” 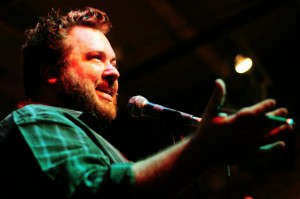 Doc Luben is the two-time Poetry Slam Champion of the Portland, Oregon poetry slam, and was a finalist at the 2013 Individual World Poetry Slam. A writer and performer in L.A. and AZ since way back in the ancient 90s, his stage plays have been featured productions at the Arizona Classical Theater, and he was the Tucson Poetry Slam Champion in 2009.

Doc was a panelist and performer at the 2010 Phoenix ComicCon Nerd Slam and was featured at the Rose City ComicCon, and has taught subversive youth workshops in writing and performance for two decades. He trained at the freakishly progressive California Institute of the Arts, where they absolutely do NOT have Walt Disney’s head frozen in the basement.

Note that tonight’s open poetry slam is a speed slam 3-, 2-, and 1-minute rounds. Slam winners qualify for the 2015 World Qualifier.