Tips from the Bar: The Nathan Comstock Prompt 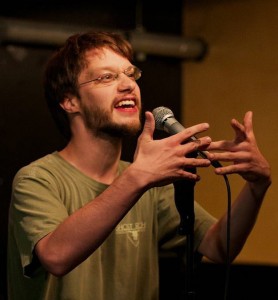 Nathan Comstock has been writing prose and poetry since high school, but he didn’t discover spoken word poetry until about three years ago when he moved to Boston from his home town of Indianapolis. From there, things spiraled out of control rather quickly. He is now a fixture at the Cantab’s open mic and has featured at such venues as Stone Soup, Rhythmic Cypher, and the Untitled Open Mic in Lowell, which he represented at the National Poetry Slam in 2013. Nathan offers up poetry that’s upbeat, funny, often geeky and often in formal verse, including what may well be the Cantab’s favorite-ever villanelles.