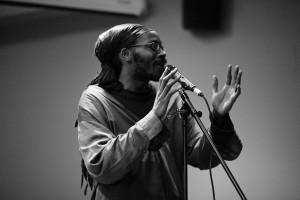 Khary Jackson is a poet, playwright, dancer and musician. He is a Cave Canem Fellow, and thus has further reason to adore black people. He has written twelve plays, one of which (Water) was produced in 2009 at Ink and Pulp Theatre in Chicago. He has been a recipient of several grants, including the 2012 Cultural Community Partnership Grant, 2010 Artist Initiative Grant for Poetry from the Minnesota State Arts Board, and the 2009 VERVE Spoken Word Grant from Intermedia Arts. As a performance poet, he has enjoyed great success in national competition, ranking nationally in 2007, 2008 and 2009, as well as winning the National Poetry Slam with the St. Paul team in 2009 and 2010. His first poetry book, Any Psalm You Want, was published with Write Bloody Publishing in the spring of 2013. 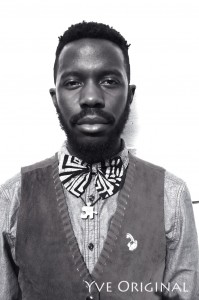 Tonight’s show will also feature a spotlight by Pages Matam, visiting from D.C.! Pages Matam is a multidimensional national touring artist, residing in the D.C. area, but originally from Cameroon, Africa. He is a Write Bloody author, playwright, and award-winning slam poet with passions in the field of youth, activism, and education. Along with his greatest accomplishment, being a father, he is also a proud gummy bear elitist, bow-tie enthusiast, professional hugger and anime fanatic. As he takes stage-– as a poet, educator, or host-– be prepared to be taken on an experience of cultural, socially conscious, and personal discovery unapologetic in its silly, yet visceral and beautifully honest in its storytelling. Be here no later than 8:30 to make sure you catch Pages’ mini-feature on the open mic! The poet will have his chapbook, God Circus, on hand for fans to purchase.