Tips from the Bar: The Five-Second Rule

Cantab Feature for Wednesday, January 8, 2014: Casey Rocheteau and the Champion of Champions Slam 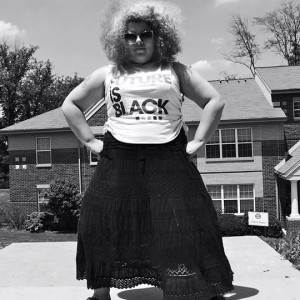 Casey Rocheteau reminds you that the future is black. Photo by Thomas Sayers Ellis.

Casey Rocheteau is a Cave Canem Fellow, performs throughout the country, and has lead a variety of writing and performance workshops. She has been involved in slam poetry since 2003 including being a member of the 2012 Providence Slam Team. She’s released two albums on the Whitehaus Family Record, self-published four books and her most recent book, Knocked Up on Yes, was released on Sargent Press in 2012. She can be reached at her personal website.

Tonight will also mark the next installment in the Champion of Champions! Tom Slavin, three-time champion, will defend his title against the winner of this season’s 8×8 slam series.