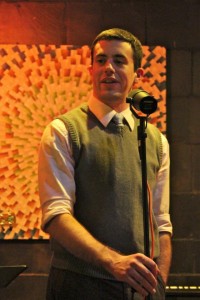 Andrew Ek is a writer, teacher, and performer who lives in Omaha, Nebraska. He is the Education Director for the Nebraska Writers Collective, a literary non-profit which sends writers into middle and high schools across the state and which puts on the Louder Than a Bomb: Omaha youth slam poetry festival every year. Andrew also co-hosts the Encyclopedia Show: Omaha with Katie F-S, has been on and coached teams representing Nebraska at the National Poetry Slam (including the 2008 team which placed 9th nationally), teaches computer programming at the University of Nebraska at Omaha, teaches math to high schoolers during the summer, makes really delicious smoothies, and plays a lot of tennis. You can read more of his writing at http://andrewcek.wordpress.com.