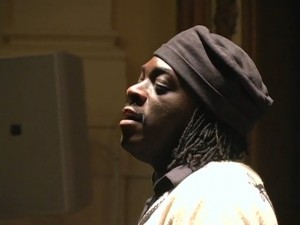 FEATURED POET: Poet, songwriter, author, workshop facilitator, and educator Regie Gibson has performed, taught, and lectured at schools, universities, theaters and various other venues on two continents and in seven countries including Havana, Cuba. He was the 1998 National Poetry Slam Individual Champion and was selected one of Chicago Tribune’s Artist of the Year for Excellence for his poetry. He has co-judged the Chicago Sun-Times Poetry Competition with Marc Smith and Mark Strand, has been regularly featured on NPR, and has appeared on HBO’s Def Poetry Jam. In 1999, Regie performed for the award-winning Traffic Series at Chicago’s Steppenwolf Theater where he adapted the work of Kurt Vonnegut. Regie founded the Literarymusic Ensemble Neon JuJu: a literary and musical arts ensemble utilizing classic, contemporary and original literary text combined with Middle Eastern, Contemporary American and European classical music.

Regie is widely published in anthologies, magazines and journals such as The Iowa Review, Harvard Divinity Magazine, Poetry Magazine, Spoken Word Revolution, The Good Men Project and several others. His full-length book of poetry Storms Beneath The Skin (EM Press) was published in 2001 and received the Golden Pen Award. His original works of poetry have been dramatized and scored by classical flautist and Professor Janet Misurell-Mitchell and produced and directed by Eric Rosen for the Steppenwolf Theater’s Words on Fire production. In 2010-11 Regie received both the Massachusetts Cultural Council Award for Poetry and a Lexington Education Foundation Grant. Regie received his MFA in Poetry from New England College.

WORKSHOP DESCRIPTION: The Unlettered Muse: Poetry and the Creative Mind. Regie will lead a lively writing workshop for those of you who want to write without all the rules you never wanted to learn anyway. By using both surrealist and structured techniques, like embedded form, ekphrasis and poetic koans, we will peep under the left and right sides of the brain and see what peeps back. 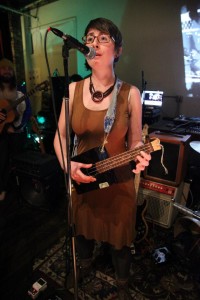 Laura Smith takes her Woodrow-Wilsons-built harmonies to her latest project, Fey Rey and Freedom Sound, on July 16 at New & Improved.

FEATURED MUSICAL GROUP: Imagine that Bruce Springsteen’s Nebraska had been written in Jamaica Plain in 2012: that record would have been made by fey rey & freedom sound. The brainchild of Regina Peterson (the Points North) and Laura Smith (the Woodrow Wilsons) who joined forces after the various fragmentations and hiatuses taken by their previous bands, these two songwriters write haunting, memorable folk songs fitting for long, late night drives or summer evenings on the back porch. Their vocal harmonies float eerily over banjo and ukulele, drawing listeners in like the gentlest of sirens. The newest line-up now features Chris McCarthy (the Woodrow Wilsons, Chris North Dream Quartet) on upright bass. Their EP “Gestation” is available through at frfs.bandcamp.com.