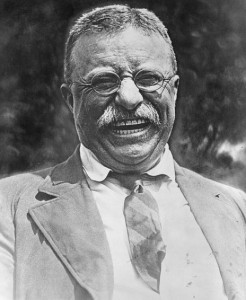 The Rough Rider himself wouldn’t miss this special holiday slam at Radio on July 2!

FEATURED MUSICIANS: The Woodrow Wilsons existed for years in the imaginations of two awkward kids in high school drama club– and like so many dreams, eventually found their way to reality in the living room of the prolific Whitehaus in Jamaica Plain. The band went on to play raucous bars and hushed living rooms all across Massachusetts until semi-retiring just this past year. The Woodrow Wilsons emerged from dormancy this winter to release Devil Jonah, a twelve-track leviathan of a record. Possibly the Wilsons’ swansong, Devil Jonah encapsulates the band’s long time fascinations with death, the ocean and lost love. The Wilsons have been talking about retirement all year– will this be their lame duck performance? Or a launchpad to their next platform? Either way, it could be their last show together, so don’t miss it!

FEATURED EVENT: Break out the sparklers and elaborate political metaphors! Tonight, we celebrate the birth of our nation with the first-ever Independence Day Presidential Smackdown Slam at New & Improved! This poetry competition will pit presidents throughout history against each other in a lyrical and rhetorical throwdown centuries in the making.

This event is produced by Kevin Spak and will feature local slam luminaries presenting brand-new, original work to get into the persona of some of the most glorious, crazy, and gloriously crazy political figures in U.S. history. True to his gaming mastermind reputation, Spak has come up with a special format just for this event that’s sure to get your holiday week started off right: each poet will represent a specific president, founding father or first lady. Competitors will go to bat for their historical political party in a round-robin of political smack-talk so vicious that it might just redraw electoral districts– each round, two poets will go head to head, and audience members will cast their ballots for whomever they think won the poetic debate! The party that wins the most face-offs will be declared the winner.

Don’t miss this one-of-a-kind event! There’s no telling when next we’ll get a chance to run a slam as wild as this one, so this might be your only chance to hear some of the original work created just for this show.

NEW AND IMPROVED MONDAYS is a weekly poetry and arts series on Mondays at Radio, a bar and performance space at 379 Somerville Ave., Union Square, Somerville. Doors open for the show at 6:30 p.m. and the workshop begins at 7:00. Open mic begins at 8:00 and the musical guests take the stage around 8:45. The slam begins at approximately 9:30. Cover charge is $5 and the show is 21+.