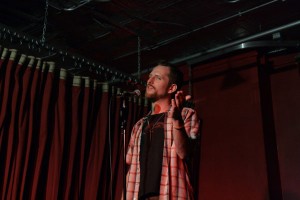 Erich Hagan gets into persona while featuring at New and Improved. Photo by Melissa Newman-Evans.

We had an intensely good time at New and Improved last night with Erich Haygun and Steve Subrizi, folks. First, the ineffable Erich set up a sweet performance workshop using the super space at Radio; yes, those cushy red curtains can indeed be used to create a tiny performance womb around the stage. Thanks to Erich for leading our first-ever performance workshop in the space! 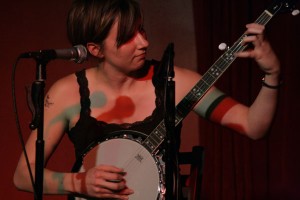 Host Jamei Bauer performs on the open mic at New and Improved. Photo by Melissa Newman-Evans.

After the workshop, our poets emerged ready to perform on a jam-packed open mic. Hosts Michael Monroe and Jamei Bauer instituted a friendly but firm no-apologies rule for our artists, prompting poets to cut to the chase and really stand up behind their work! Jamei closed out the night with a Magnetic Fields cover, reminding the crowd that, yes, our open mic is open to more than one genre of artist.

Erich Haygun started his feature with a bang, breaking through the fourth wall immediately to kill the stage lights and work the darkened room! After messing with our expectations, Erich settled back into his feature, running a few more pieces from his Cantab set on Wednesday, but also sharing some totally new-to-us work. Our musical guest thereafter was the ineffable Steve Subrizi, who performed a flawless set that ranged seamlessly from ballad to blues to punk, and featured appearances by the talented Kirsten Opstad and Sam Teitel. 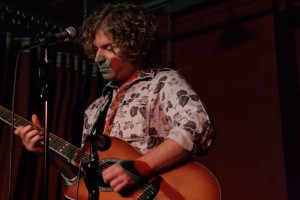 All that and drinks, too? You got it: the bar at Radio has a fabulous selection of cocktails… And they also take credit cards, which is a nice switch. You should think about swinging by next Monday, when we’ll feature poet Claudia Wilson and playwright Antonia Lassar! Antonia will be running the evening’s workshop about performance (pre-prepared poems welcome, but not required), and her feature will be a shortened version of her one-woman play, The God Box– there is a rumor that cheesecake might be involved. Claudia will be featuring for the first time at a Boston Poetry Show, and we are very excited to share this Columbus poet with the crowd.

If you’ve been waiting for the right night to come to New and Improved, this could be your big chance! Now that we’ve added a fancy new directions page, you can’t even pretend you don’t know where Union Square is… See you Monday, folks!