Tips from the Bar: The Stephen Hawkings Buddha Prompt 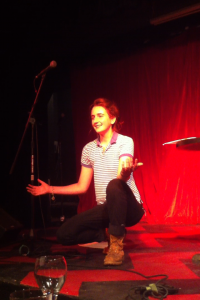 Laura Brown-Lavoie is a spoken word poet from Providence, Rhode Island. A newcomer to the national slam scene, she was the 2011 Providence Grand Slam Champion and had the opportunity to perform on Finals stage at the National Poetry Slam in Boston, where she and her Providence teammates took third place.

When she isn’t writing, Laura works as an urban farmer, growing food on two vacant lots in Providence. While much of her poetry is inspired by her interactions with the urban natural environment, she also writes to interrogate the use of language in politics and the mainstream media, and, of course, to figure out where the she is in all of this.

She is committed to spoken word performance as a means of fostering creative community in a culture where too often people are isolated from one another in favor of glowing screens. Her mom is a high school English teacher, and her dad is a storyteller, and she takes any opportunity she can to be in rooms full of people where beautiful things are being said out loud. Oh, and Laura effin’ loves public libraries.