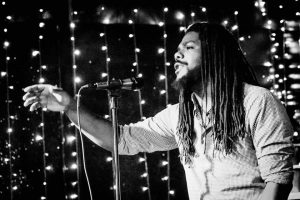 Raised in South Central Los Angeles, Wayne Henry was exposed to a melting pot of different cultures which has allowed him to have a broad canvas for his work. Henry has become a passionate poet who writes each line to watch it come alive through poetry. Dedicated to bringing awareness to issues such as mental health, oppression, depression and concepts of spiritual growth. Wayne Henry was a two-time Dallas Poetry Slam Team member and holds the titles of 2017 Dallas Grand Slam Champion, 2018 Black Art Film Festival Slam Champion, and a 5th place finish at the 2018 Individual World Poetry Slam. Aside from poetry, working with the youth has been what the poet feels is his crowning achievement.