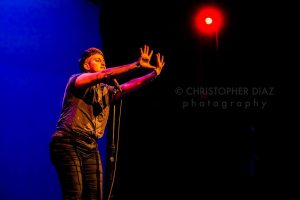 Linette Reeman (b. 1996; they/them pronouns) is an Aries from the Jersey Shore, so they’re not sure what you mean by “speed limit.” Their work focuses on the intersections of transgender identity, mental illness and its subsequent vices, escaping suburbia, and sexuality in context.

Linette is the final/reigning Loser Slam Grand Slam Champ (2016), a multiple Pushcart Prize, Best of the Net, and Bettering American Poetry nominee (2016 & 2017), hosted finals stage at the 2017 Texas Grand Slam, was a CUPSI semi-finalist representing Rowan University (2016), and previously held an executive board position for the Philadelphia Fuze Slam. Linette has toured extensively throughout the United States, performing at venues such as Busboys & Poets, Electric Truth, Write About Now, and the Bowery Poetry Club, and embarks on THE COMET TOUR with Canadian poet Kay Kassirer in January 2018. Linette has also designed the layout for a multitude of print-based projects, including the 2016 Women of the World Poetry Slam Festival Guide and Philadelphia-based poet Noor B. Jaber’s chapbook Sovereign Ancestrial. Linette’s work has been published or is forth-coming from journals like Public Pool, FreezeRay, Blueshift Journal, Crab Fat Magazine, The Penn Review, Juked, Tinderbox Journal, and most recently they won Sundog Lit’s inaugural collaboration contest with torrin a. greathouse.

Currently, Linette is sort-of completing a bachelor’s degree in history, but is mostly just trying to survive in small-town America.