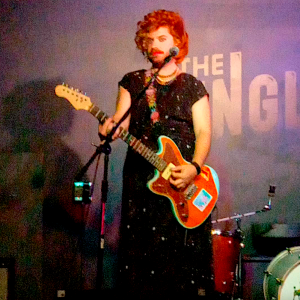 Stevie Subrizi first visited the Cantab in 2004 on a field trip with an Emerson College writing group. They have been a regular for much of the time since. At the Cantab’s downstairs bar on Wednesday night, the cocktail that long bore their name was a bourbon and tonic with a lime wedge; an “Improved Subrizi Cocktail” would also include a few dashes of Angostura bitters, as a gesture toward the “Suffering Bastard.”

Stevie is the author of several chapbooks, including Alone and Naked inside of a Whale, winner of the 2021 Yemassee Journal Poetry Chapbook Contest, judged by Dustin Pearson. Their work has appeared in such other places as Neon, Muzzle, NAILED, and FreezeRay, and they have performed their poetry at dive bars and lecture halls across America— alone; with Sam Teitel; and as a member of Emerson’s premier slam team, The Gringo Choir, which also included Carrie Rudzinski, Maxwell Kessler, and Carlos Williams.

From 2012 to 2015, they were a recurring cast member (as “Intern Steve”) and contributor to the Encyclopedia Show: Somerville.

They are also a singer-songwriter, and they have released many albums and EPs over the years.