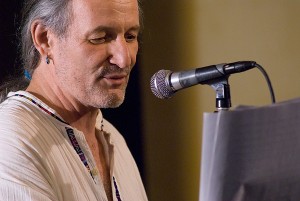 Here are a few words from a prominent and prolific community member, Richard Cambridge…

How I found the poetry slam? Well, the Slam found me, one snowy night in March 1991 when I walked into TT the Bear’s and saw a woman spitting fire from the stage. That was, of course, Patricia Smith.

When it was my turn at the open mike I read a poem I had just written, The Life of a Man, dedicated to Rubin “Hurricane” Carter, the middleweight who was framed for a triple murder in Paterson, NJ. Patricia was in the “amen” corner cheering me on. When I was done she came up to me and said something like, “That poem you did– it would be perfect for slam.” I was hooked.

It would take a year before I learned to harness my dervish energy into performance art and begin to win my first slams at the Bookseller’s Café in North Cambridge, the new venue created by Patricia and Michael Brown. They were my first teachers in this new art form. When Michael announced one spring night in 1992 that Boston would host the upcoming National Poetry Slam, that’s what I set my sights for: winning a spot on the team. 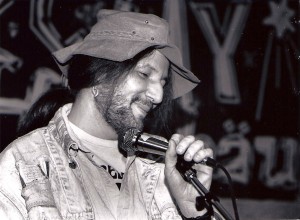 I did, by the barest of margins, something like less than a tenth of a percent. The slam for me was like Master Class in the College of the Muse. It gave me my chops to go out into the world and share my art. My teammates in 1992 were Danny Solis, Ray McNiece, and Benson Wheeler. We spent most of that summer hanging out and rehearsing, rehearsing, rehearsing. We never doubted we would win. [SlamMaster’s note– And they did! The 1992 Boston Poetry Slam team took the championship title at the National Poetry Slam on their home turf in Cambridge.]

In recent years I’ve turned to prose, writing an autobiographical novel about a hitchhiking adventure. I read the first draft at the weekly open mic at the Cantab, which took two nearly two and a half years of weekly installments! Finishing the novel as a feature in November 2008 was one of the highlights of my life. I will always be grateful to the welcoming souls at the Boston Poetry Slam for this.

I currently host the Poets’ Theatre at Somerville’s Arts at the Armory. If you’ve got some kind of sexy mix of performance art grounded in the spoken word, give me a shout for a gig. You can also visit me at my website: richardcambridgepoetry.com.