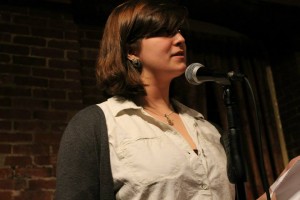 Ellyn Touchette wrote her first poem when she was six years old and saw her first psychologist shortly afterwards. Her work–both on and off page–deals largely with different facets of mental illness as it affects daily life. Ellyn lives in Portland, Maine, and has represented Port Veritas’ Second Tuesday Slam at Women of the World Poetry Slam and the 2014 National Poetry Slam, as well as Manchester’s Slam Free or Die 2015 National Poetry Slam team. Ellyn also serves on Port Veritas’ Board of Directors. Her work is featured or forthcoming in The Emerson Review, The Open Field, Wicked Banshee, Ghost House Review, among others. She is referred to as a “scheming bitch” by George R.R. Martin on page 714 of A Feast For Crows and wants to make sure that everyone knows.

Ellyn defeated Sean Patrick Mulroy for the Champion of Champions title on April 23, 2014. She was deposed by Bobby Crawford on August 13, 2014.