Tips from the Bar: Weekend Getaway

Whoops! Cantabbers, as sometimes happens, due to circumstances beyond her control, Emily Duggan’s feature has been postponed to a future date. Instead, we are proud to present the following last-minute fill-ins of utmost quality: Madeline Maienza and Evan Cutts! 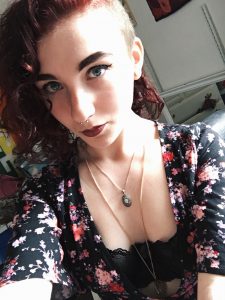 As you may know, the 2017 National Poetry Slam took place last week, and the week before that was a schedule packed with New England venues bidding grand good luck to their departing teams. Also departing– with intent to volunteer and spectate at the tournament– were a number of hardy locals, some of whom were lucky enough to draw spots in the festival’s Last Chance Slam. Two NorthBEASTERs came out in the top four of this melee, earning them fifty percent of the spots on the appropriately-named Cross Country Collective; the rookies earned a rank of 41 out of 80 in the tournament, and a #1 in our hearts. Since they never got a send-off, please welcome these two hard-repping Last Chance slammers home! 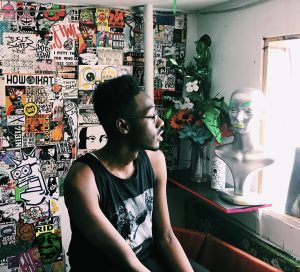 Madeline Maienza is a 20-year-old genderqueer poet & dreamboat barista who public-cries most frequently in Manchester, N.H. Their work has appeared or is forthcoming on Slamfind, New Hampshire Public Radio, & thriving (gloworm press), and The Other Side of Violet (great weather for MEDIA). Through their work, they hope to remind the world and also themself that femme is not fragile, that there is strength in softness, and that queer survival in the face of systematic violence is inherently, indisputably brave. Visit them on twitter: @sadeline_ / Instagram: @depressoshot.

Evan Jymaal Cutts is a 23-year-old Boston native, poet, freelance writer, and writing workshop facilitator. Evan was a member of the Emerson College 2017 CUPSI Team and NPS 2017 Last Chance Slam Team. He puts faith in Black joy, his parents, and the collective power of imagination and empathy. His poetry navigates expressions of Blackness, local reality and myth, heritage, and magic. His first collection of poetry, Encounters and Other Poems, was self-published this year and can be ordered online. His poetry can be found online at Voicemail Poems, Maps for Teeth, The Merrimack Review, Apogee Journal, and Broken Head Press. Find him on at Facebook or, for booking, email cuttsartistry@gmail.com.

Bio of the postponed feature: 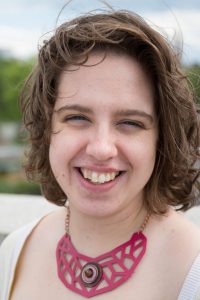 Emily Duggan has studied creative writing, performance poetry, straight and applied theatre, and improv, sketch, and stand-up comedy at Brandeis University, GrubStreet, ImprovBoston, and The Second City— Chicago. Her day job is a night job as a Ghost Host (“dead for bread”) with Ghosts & Gravestones’ haunted trolley/burying-ground tour, where she is always working the graveyard shift, natch. Emily has spent 96% of her life (and all of her death) in the Greater Boston area, so, at the end of August, she will begin her candidacy for the MFA in Writing at the School of the Art Institute of Chicago.