Tips from the Bar: That’s Not What I Was Looking For 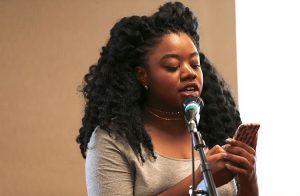 Tatiana M.R. Johnson is a black woman artist, writer and 2017 Pushcart Prize XLI nominee from Boston, whose writing explores identity, trauma, especially inherited trauma and what it means to heal. She feels especially good when someone tells her that they felt something by reading her work.

Tatiana’s chapbook “for the love of black girls” was freshly released in July 2017, and is now available directly from the poet, or on Amazon (follow this link). She has been published in Fog Machine, Hypertrophic Press, Maps for Teeth Magazine, Madcap Review and Broad! Magazine. Read more of her work on her website: tatianamrjohnson.squarespace.com.

But wait… That’s not all! We’ll also present a spotlight from an old-guard west coast touring poet. The spotlight takes place as part of the open mic, so plan to arrive by 8:30 if you don’t want to miss this special appearance. 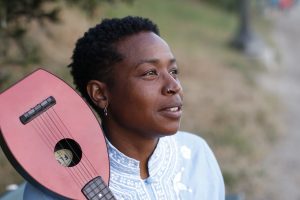 SevanKelee Boult (Lucky 7) is a well known Bay Area poet and performer, and a 2017 Queer Culture Center Emerging Artist. This UC Berkeley graduate has a minor in Theatre Arts and is continuously redefining her poetry and performance. Gracing such stages as The Palace of Fine Arts, Yerba Buena, De Young Museum, Brava Theater and The Marsh Theater(s) in San Francisco, she has also represented several Bay Area slam teams over the past fifteen years. In 2014, she became the only person in the Bay to win the honored title Grand Slam Champion of of different Bay Area Slam teams (SF, Berkeley, Oakland, and Palo Alto). SevanKelee’s poem “Cucumber” has been seen on HBO Real Sex since 2000, and her poem “Listening to Pain” appears in the spring 2017 issue of Foglifter Journal.