Tips from the Bar: White Elephant 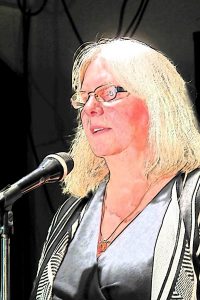 Valerie has worked as a bookseller and a security guard at a Rolls Royce show, coordinated a literacy program, co-hosted the Boston Poetry Slam, emceed the National Poetry Slam in Sweden, helped create a network of youth poetry slams in southern New England, was invited as a Legacy Poet to the first Women of the World Poetry Slam, and participated in cultural exchanges with Ireland. Her work has been published in Main Street Rag, BigCityLit, About Place Journal, The Catch, Ibbetson Street, and others. Nominated for a Pushcart Prize three times, Valerie won awards for Best Narrative Poem and Spoken Word at the Cambridge Poetry Awards and was a finalist for the 2015 Rita Dove Award. With her partner, Michael Brown, she co-edits Off the Coast literary journal and teaches poetry workshops in New England.