Tips from the Bar: Down to the Crossroads 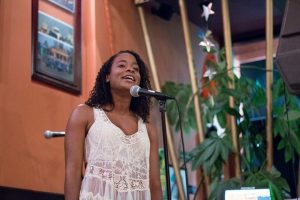 Jasmin not only prides herself on writing hard-hitting and introspective poetry that educates and offers commentary on current world issues, but she also likes to remind us not to take ourselves too seriously, by using words like “fuckability” and “homotastic.” She will make you laugh your ass off and question your place in the world in the span of three minutes, and she’ll do it all sporting 4-inch heels and skinny-jean overalls.

For a sample of Jasmin’s work, check out “Black Man, White House” on YouTube via SlamFind.