Tips from the Bar: Did Someone Say Rhetorical?

Whaaaaaaaaaaaaaat Muggs Fogarty was in the house this week and blew. our. ever-lovin’. MINDS. In a feature that was fabulously worth the wait, Muggs settled into a rhythm early and brought us on a heavy journey through the darkness, only to shake us into the light at the end. What a lovely and thoughtful feature; huge thanks to Muggs for coming up from their home slam in Providence to share work with us. What a great night! 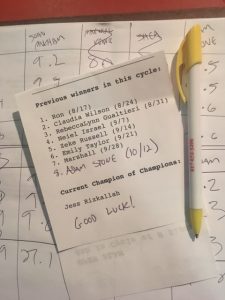 Finalized 8×8 standings for the fall championship scheduled for October 19, 2016.

Our slam that night was hosted the the ever-excellent Tom Slavin, who paved the way for six poets to throw down for the final slam in the 8×8 series. The last round came down to John Pinkham and Adam Stone, both gunning for the win with big performances; bartender Adam took the win, the ten dollars, and the chance to challenge Jess Rizkallah at next week’s Champion of Champions slam.

But wait: that’s not all that’s on the docket for next week! Get ready to welcome 2013 NZ National champ (Yes, that’s NZ for NEW ZEALAND) Mohamed Hassan to a spotlight, followed up by our own National champ Marty McConnell coming to us from Chicago. It’s gonna be the biggest night of the fall, so get in the door early if you want to read, sit in a chair, or belly up to the bar!