Rescheduled from September 7, 2016, as promised! 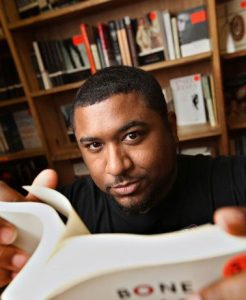 Scott Woods is the author of Urban Contemporary History Month and We Over Here Now (2016 and 2013 respectively, Brick Cave Books) and has published and edited work in a variety of publications. He has been featured multiple times in national press, including multiple appearances on National Public Radio. He was the President of Poetry Slam, Inc. and emcees the Writers’ Block Poetry Night, an open mic series in Columbus, Ohio. In April of 2006 he became the first poet to ever complete a 24-hour solo poetry reading, a feat he bested with seven more annual readings without repeating a single poem.