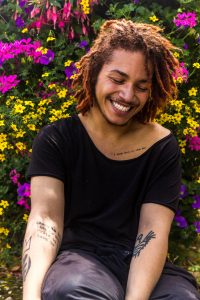 Gabriel Ramirez is a Afro-Latinx poet, activist, and teaching artist. A youth mentor at Urban Word NYC, Gabriel has received fellowships from The Watering Hole, Willow Books and Callaloo and has performed on Broadway at the New Amsterdam Theatre, United Nations, Lincoln Center and the Apollo Theatre. In addition, he has been featured in The Huffington Post, VIBE Magazine, Blavity, Upworthy, The Flama and at a TEDxYouth Conference.

Gabriel has gone on to represent New York City at the National Poetry Slam festival on top semi-finalist teams in 2014 and 2015. You can find his work in various spaces, including Youtube, and in publications like The Volta, Jasper, VINYL and forthcoming in The Offing, African Voices and Afro-Latino Poetry Anthology (Arte Público Press 2016).