Postcard from Friday at the 2016 National Poetry Slam

The 2016 Boston Poetry Slam team is inordinately pleased to announce that we are ranked 12th in the nation after two nights of poetry, qualifying us for semi-finals! The BPS took the win last night in a room at Decatur City Hall over BamaSlam from Montevallo and our two NorthBEAST allies from Mill City and Providence. You can follow along with the semi-final scores here. 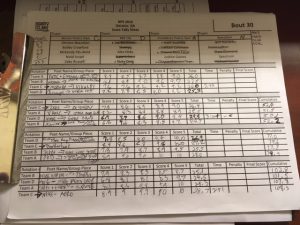 Four teams entered the Commission Meeting room at the City Hall last night, all looking for a win: Mill City and BamaSlam had both ranked 3 on Tuesday and were hoping for a long shot at semi-finals, with Providence and the BPS both sitting on 2s and needing a win to earn the chance to keep playing on Friday. A mad-efficient bout management and hosting team had us starting our bout at 7:01 p.m. and we were off with a totally creepy-funny sacrifice poem (“lumbersexual”) by Stephen Meads.

The first round kicked off with a Providence group piece from Vatic Kuumba and Justice Gaines, making intense wordplay with the term “free” for just a mid-range score from the judges. BamaSlam sent solo poet Michael Harriot up next, whose tightly woven solo poem about his mother’s darkness pulled the scores up an extra point and a half; Mckendy Fils-Aimé followed with a big performance of Vivaldi, which the judges put on precisely equal footing with Providence’s score. Mill City closed out with a strong opening effort from Shampy, putting them less than a point behind the BPS and PVD.

Round two was Boston’s chance to open, and Zeke Russell was the guy to do it: Zeke started Recovery up close to the mic, then was the first poet of the night to forgo amplification entirely in the small, high-ceilinged room, earning a good score bump for his efforts. Providence brought Vatic back to the stage for a solo piece (familiar to those who came to their regional at the Cantab this July), and Mill City sent Nate Leland to the stage, then to stand on a chair, for his famed garage band poem. The round finished with a solo love poem from BamaSlam, with no poet catching up with the judge love that Zeke had already earned, and giving the Cantab a tiny 0.2 lead over Bama and 0.9 over Providence.

Mill City dug deep with a brand new group piece in Ricky Ormg’s spot to open round three, earning a respectably high score. Cantab made the choice to bring up the first poem featuring only women on the stage with Neiel Israel and Simone performing Brotherhood, which bounced the Cantab ahead to the lead. Jerry Hardesty followed with a classic solo piece, then Providence closed the round with a three-poet group piece on the “sick” brain featuring Justice, Chrysanthemum Tran, and Sheena Faisal, finally getting the judges to give up some nine’s and earning the high score of the night so far. The third round finished with Cantab just 0.1 ahead of Providence, and the other two teams about two points back.

For the two 2s in the bout, it all came down to the final round. With BamaSlam opening from the tough B spot and Mill City out of the running but performing strong, it’d be Providence first, Cantab second. Providence chose their “survive” group piece with Justice and Chrysanthemum, which earned the high score of the night and left Cantab needing the capper. Fortunately, Neiel Israel was up to the task: taking the stage, she topped all the scores of the night with a blazing off-mic performance of “Afro,” bringing the win –and the qualification for semis– home for the BPS.

In subsequent news: House finished with a strong 1 over Slam Free or Die in a later bout, then Northampton qualified for Group Piece Finals in a wild bout where they ranked their highest yet at NPS (congrats, Noho!). The BPS team bouts tonight, versus House Slam (you heard that right), Brooklyn, Bull City, and Houston VIP in a barnburner of a semi-final bout. Wish you were here, Cantab!