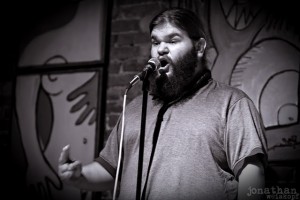 Jared Singer is an audio engineer and poet who lives in Brooklyn, N.Y. He has represented New York eight times at the national slam level, including two Finals Stage appearances at the National Poetry Slam. He is a five-time New York City Grand Slam Champion and his work has appeared in The Legendary, Union Square Lit Mag, Poets of the Blue Ridge, The Huffington Post, and more. He writes frequently about his favorite things in the world— science, comic books, and love. Jared believes in the healing power of kittens, whiskey, and listing things in groups of three.